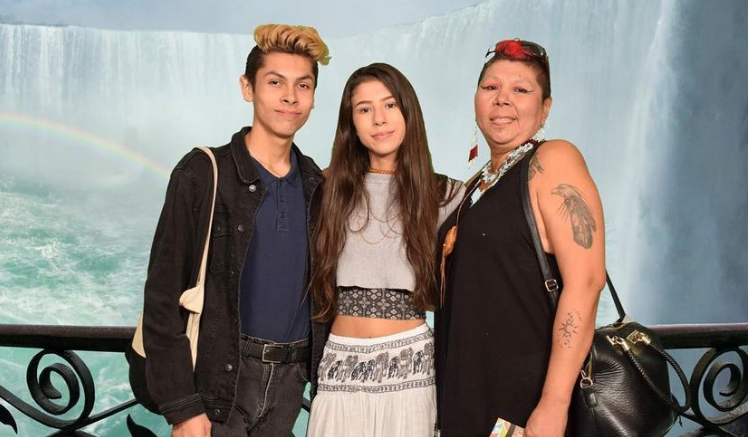 Melanie Ashkewe proclaims, “I’m an open book.” At 51, Melanie, a mother of three adult children and a grandmother, is comfortable and happy to share her story. However, it wasn’t always easy for her to share. Melanie explains, “Not in the beginning, but I’m over that stage. Yeah, I smoked. Yeah, I drank. Yeah, I did drugs.” Now, Melanie is telling her story in hopes her experiences will show others that life does get better.

Melanie’s story begins home on Cape Croker, Ontario where she grew up as a member of the Chippewas of Nawash Unceded First Nation. Growing up in foster homes and group homes, she developed an addiction to drugs and alcohol as a child, that continued as a young adult and then into adulthood.

At 17, Melanie moved to Toronto with a cousin and recalls, “When I first came to Toronto, life was pretty much addiction. Again, with the drinking and partying and carrying on. I looked older than I was so I could get into bars, and I hung around with the ‘drinkers’. I rented a hotel room and stayed for two months but the money started dwindling. After that, I ended up without a home and living in Moss Park.” Within five months of being in Toronto, Melanie found herself pregnant with her first child.

By the time Melanie had her second child, life was getting better. Melanie explains, “I tried to calm down a lot. I wasn’t on the street. I had an apartment. But it took me a long time to get control of my addiction. My grandmother drank, my mother drank, I drank. I wanted to change that cycle. I had to change the cycle.”

“People ask me all the time how I got sober,” Melanie explains. “I quit drinking, smoking, and doing drugs all on the same day. I had an infection in my foot and Teresa started me on two weeks of antibiotics, and I knew you were not supposed to drink while on them.” Melanie adds, “After the two weeks, Teresa wanted to give me another two weeks of antibiotics, to make sure that all of the infection was cleared. After four weeks, I realized I wasn’t missing drugs and alcohol. I decided that I’m going to keep going and see how long I can go.”

Today, Melanie is nearly eight years sober and successfully changing the cycle of addiction in her family. While seeing Teresa was the original impetus to get sober, she has found other interests to keep her going. She enjoys walks with her three dogs, spending time with her children and embracing her Indigenous heritage with traditional dancing, designing and creating her own regalia and doing beadwork. “My next regalia is in honour of my mum who passed away December 12, 2021, of pancreatic cancer. I thought my biggest obstacle to maintaining my sobriety would be my mom’s passing, but the temptation hasn’t been there. The craving wasn’t there. My mom wouldn’t want me to drink.”