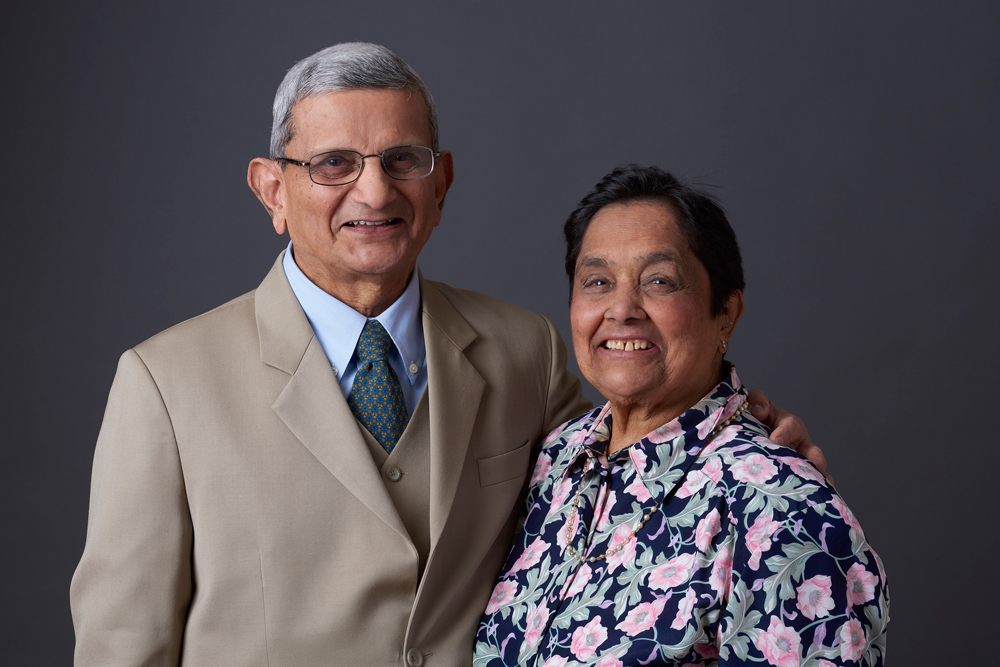 A Physician’s Commitment to Indigenous Health:

Drs. Chandrakant P. Shah and Sudha Shah extend his nearly 50 years of Commitment to Indigenous Health with a Generous Gift of $100,000

For Dr. Chandrakant P. Shah, Professor Emeritus at the Dalla Lana School of Public Health and Honorary Consulting Physician at Anishnawbe Health Toronto (AHT), commitment to Indigenous Health goes back more than four decades. In the mid-70s, the University of Toronto Professor of Public Health and Paediatrician first volunteered to serve as a clinician for 26 First Nations in the Sioux Lookout Zone, a role he continued until 1988.

“As a relatively new immigrant to Canada, I had no exposure to First Nations People. When I visited one of these communities, I was taken for a home visit by canoe to see a woman struggling with multiple sclerosis, as she could not travel to the clinic. When I visited her, she told me her major concern was not her own health; she was worried for her four young children who did not have enough to eat. Her home was cold and drafty; the home had no indoor plumbing and the kitchen cupboards were bare. I was heartbroken! I thought to myself, here in Canada, we boast about being the breadbasket for whole world, and yet, in my own backyard, children are starving,” remembers Dr. Shah.

Dr. Shah became a strong ally of Indigenous Canadians. His commitment and dedication grew to helping the medical profession to understand the impacts of historical trauma and the social determinants of health on both the quality of life and life expectancy of Indigenous peoples.

“While I continued to visit First Nations communities to provide healthcare services, I also began to understand that First Nations, Métis and Inuit peoples living in urban areas were a growing population. Today, 60% of Indigenous people live in Canada’s urban cities,” says Dr. Shah. After his retirement from the University of Toronto, Dr. Shah agreed to come to work to support Toronto’s Indigenous Community as a physician at AHT. Dr. Shah worked alongside and collaboratively with Traditional Healers, medicine people, counsellors and other multidisciplinary healthcare professionals to help urban Indigenous peoples reclaim their health and cultural identity.

More importantly, he has been a strong advocate for self-determination and the leadership by Indigenous people, including the role of Traditional healing practices in moving healthcare forward. He also successfully advocated for the inclusion of more information about Canada’s First Peoples in Citizenship information for new Canadians so that people like him and his wife Sudha, who came to Canada in the early 60s, would have a better understanding of the impact and history of Indigenous people on our country. (See more of the history here https://bit.ly/2USO0Su )

Today, at the age of 82 and after he has now retired (for a second time) from his day-to-day work as a staff physician at AHT, Dr. Shah continues to support the work of Anishnawbe Health as Honorary Physician Consultant. He provides advice and guidance on current issues. He volunteers as a Board member and Chair of the Finance Committee for our new Foundation where he is actively recruiting donors, sponsors and partners to support the campaign for a new home for the organization.

Always one to lead by example, Dr. Shah, Dr. Sudha Shah and their family have made their own leadership gift to the campaign.

Dr. Shah and his wife Sudha, generously gave $100,000 to support the Foundation’s campaign to raise funds to support a new home for Anishnawbe Health that will bring all of its services and programs under one roof. In recognition of this gift, the Reception area on the Primary Care Floor of the new Health Centre will be named in honour of the Shah Family. “I strongly believe in the need for a new facility for Anishnawbe Health. Primary health care was the focus of nearly 20 years of my career and I knew it was where we wanted to direct our support,” says Dr. Shah. This reception area is the first point of contact for clients visiting primary care physicians and team members for medical challenges and to seek support in managing chronic disease such as Diabetes and hypertension.

For more information on how you can join the Shahs in supporting the work of our Foundation, please visit our campaign page here.