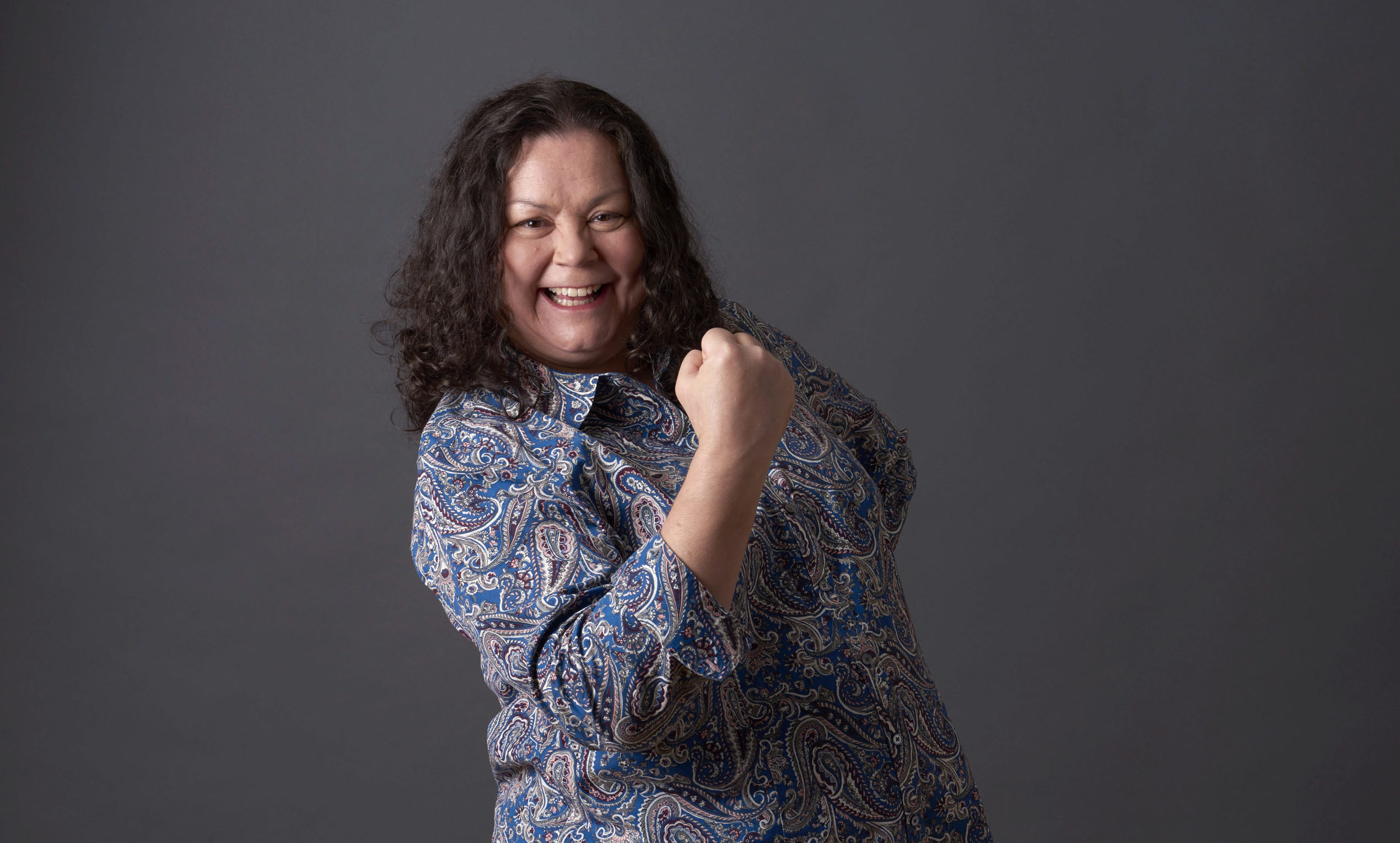 A Journey to Loving Herself Again

“After years of abuse and addiction, I’m in love with myself again thanks to Anishnawbe Health helping me find my true identity.”

Carolyn came to Anishnawbe Health Toronto for primary care over the years, particularly for physiotherapy and chiropractic services related to her severe arthritis but it wasn’t until she sought help for her substance use in 2015 that she found support to get her on the best path forward with Aboriginal Mental Health and Addiction (AMHA).

Carolyn was born and raised in Toronto to a British father and a mother from Listuguj Mi’Gmaq Traditional Territory (Quebec). When Carolyn’s mother was born she was unable to be in the care of her mother so she was raised by her Grandmother, who died when her mother was five-years-old. Her mother was then put into foster care and later placed at Shubenacadie Residential School. She was brought back to her foster home and ran away to Toronto, at the age of 17, to escape abuse.

Growing up in Toronto, Carolyn was raised to deny her Mi’Gmaq identity. “My mom cautioned my brother and me against telling people that we were First Nations because of the racism and violence that Indigenous people faced in the City of Toronto at that time,” says Carolyn.

As an adult, Carolyn struggled with alcohol but it wasn’t until she found herself in an abusive relationship in the early 2000s that she recognized the severity of her addiction. Despite going to court for restraining orders, pressing charges against her ex-boyfriend for abuse and stalking, moving house with her two children several times, Carolyn had a very difficult time removing him from her life and keeping her sobriety. She tried many different addiction programs, both day and residential, in the city and they would work for a short-time. Her severe arthritis eventually required total knee replacement surgery for both knees and the painkillers prescribed contributed to her continuing addiction.

In 2015, a trusted friend Evan introduced her to smudging outside of a day treatment program and he talked to her about Traditional Teachings that he was learning through Anishnawbe Health’s Addictions program. “It was my first time hearing these teachings and I found them so valuable that I shared them with my mother who recalled some of them from her community. I continue to share these teaching with family and friends and they are most appreciative to learn them.”

Carolyn started her addiction program at AMHA attending many sessions each week with Traditional Healers, therapists, counsellors and weekly group therapy. “One AMHA Chayuuweytim (counsellor) noticed that I had PTSD which had been untreated for years and referred me to a Seeking Safety program outside of Anishnawbe Health to help me recover from trauma. Once I had completed the program another Chayuuweytim acquired the knowledge of the Seeking Safety program to assist me further with my journey of healing. I am so thrilled to hear Anishnawbe Health has now incorporated this program at their facility,” says Carolyn.

“I have now incorporated smudging at home and learned many traditional arts like beading, weaving, hand drums and dream catchers. When I attended other programs, I never felt like I fit in but AHT was so welcoming to me. I’ve found my identity.” With Anishnawbe Health guiding her, Carolyn has found sobriety and feels confident about the future.

Carolyn made the initiative to meet her Indigenous family and went to Listuguj Mi’Gmaq Traditional Territory discovering she had many relatives. She finds strength and inspiration visiting her relatives and attends their Traditional Pow-wow as much as she can.

She also finds strength in giving back. Carolyn learned food handling practices and helped with serving food at ceremonies and participated in healthy cooking classes with the AHT Diabetes Team. She is currently involved with a Truth and Reconciliation working group at the Canadian Mental Health Association of Toronto proposing committing to engaging with Indigenous communities across the City of Toronto to build meaningful and mutually beneficial relationships to create safe spaces and services that will enhance Indigenous service users’ health outcomes.

“I’m so filled with gratitude and have great hope for the future thanks to Anishnawbe Health.”

For more information on how you can support clients and staff at Anishnawbe Health, like Carolyn, please visit our campaign page here.