Giving as a Family – Supporting Projects in the Areas of Health, Education, Sanitation and Clean Water are Priorities for the Shah Family and their Business FOAMCO Canada

A few years ago, after he passed leadership of the family business he had built with his brother Mahendra to his son Adarsh, Chandrakant J. (Cijay) Shah has focused his retirement on two areas – his family and philanthropy. In supporting the campaign for a new Anishnawbe Health, he has brought both together to make a difference in the lives of an underserved community that struggles with poverty. The Shah family believes in giving back to the communities in which their businesses operate.

The Shah Family and their business FOAMCO Canada have donated $75,000 to support a new home for Anishnawbe Health Toronto. Their generosity will be recognized by naming two rooms in the centre on the Primary Care Floor –a physiotherapy suite and a Traditional Healers room.

“My father moved to East Africa in 1917 because his family didn’t have enough to eat due to a decade-long famine in India. He developed diabetes at the young age of 37 whilst in Kenya and, at that time, it was difficult to access insulin in Mombasa, Kenya, where I grew up. I was hardly seven years old when he died due to complications from diabetes in December 1953 so I know the toll it can take on a family,” says Cijay. “I know that diabetes also impacts the Indigenous community at higher rates and younger ages, so we are pleased to invest in areas of the health centre that we know will support care and healing for people with diabetes.”

After high school in Kenya, Cijay moved to the UK and then the US for studies in Engineering and an MBA in Business, respectively. After graduation, he worked in several areas of the family business in London, England and Nigeria, before moving to Canada. The Shah Family has businesses in 15 countries with five generations of over 200 Shahs involved in the Shah Family Enterprise.

Cijay is active with many community groups in Toronto including the Rotary Clubs of the Don Valley (President 2005) and Toronto, serving as Chair of the Canada-Kenya Chamber of Commerce, a committee member in the Jain Society which promotes vegetarianism and non-violence, and he was a founder and director of Oshwals Canada, an organization connecting to culture and family tradition. 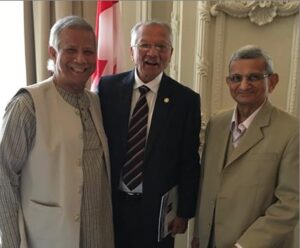 “Our family has thrived in Canada since we moved here in 1988 to start the North American arm of our family business.  FOAMCO Canada has grown into Canada’s largest independent foam fabricator;  my wife Ranjula served as a high school science teacher for many years, and my daughter Shreya, daughter-in-law  Sona and my niece Suha have successful careers and hold senior positions in the financial industry.  Giving back to community is important to us,” notes Cijay.  “In India, together with Rotary Clubs, we have focused our family giving on raising funds to build 100 toilets for girls because we know that these facilities make it possible for girls to go to school.  In Africa, we have supported orphanages and schools for children impacted by HIV and neurological diseases in Kenya, Uganda and Tanzania.”

When considering causes in Canada to support, Cijay’s friend Dr. Chandrakant P. Shah (no relation) told him of his work as a physician at Anishnawbe Health Toronto. “I admire Anishnawbe Health’s work to bring Western and traditional medicine together to support the Indigenous community. Culture, identity and community are important for health. My family is pleased to support a new home for Anishnawbe Health staff and clients and support this work into the future.”

Anishnawbe Health is proud to have Cijay and his family as leading supporters of the Campaign for a new Anishnawbe Health Toronto. To join the Shah family in supporting the campaign, please visit www.supportanishnawbe.ca/donate/make-a-donation/