On the early morning of June 20, a group of dedicated and passionate cyclists embarked from High Park on the “Every Child Matters Ride for Reconciliation – 215 km Bike Ride” to raise funds for AHF. The ride and fundraiser were held to honour both the First Nations children lost but also survivors of the Indian Residential School system in Canada. The cyclists rode as an act of reconciliation to the site of the Mohawk Residential School grounds in Brantford, Ontario. The ride totaled 215 kilometres, each one in memory of the 215 children lost in Kamloops.

When the cyclists, made up of riders from Morning Glory Cycling Club, Batemans, and Dark Horse Flyers arrived at their destination, they visited the grounds of the Mohawk Institute where they met up with Residential School Survivor Geronimo Henry. Geronimo was at the Mohawk Residential school for 11 years. He has been offering his time to meet with folks who are stopping by to offer tributes to the children and he shared stories with the riders over lunch. 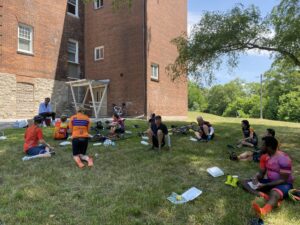 The group started with a fundraising goal of $5,000 but quickly surpassed that number and is now at over $22,000.

It’s not too late to donate. Fundraising ends June 30, 2021. If you would like to contribute to the “Every Child Matters Ride for Reconciliation – 215 km Bike Ride” visit bit.ly/2TTeU0Q